There seems to be a moment now where journalism is front and center in a number of new films. Here’s a recap of what’s out there: we would recommend you go to see them. Doing so will certainly increase your awareness of what the media deal with….as well as giving you fodder for conversations with journalists. What deep, dark secrets might a wine writer uncover? One never knows! 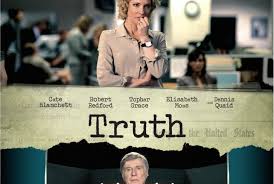 Truth is based on television news producer Mary Mapes’ memoir Truth and Duty: The Press, the President and the Privilege of Power. The film focuses on the 60 Minutes report questioning President George W. Bush’s military service, which ended in Dan Rather’s resignation. Robert Redford plays Dan Rather.

The Program hasn’t arrived in the U.S. yet: based on David Walsh’s book Seven Deadly Zins, it tells the back story of a journalist’s attempt to expose Lance Armstrong’s doping.

Snowden, based on the book The Snowden Files, directed by Oliver Stone, re-creates the leaking of classified documents. It stars Joseph Gordon-Levitt, Shailene Woodley, Nicolas Cage and Tom Wilkinson.

The producer of Truth recently explained that “one of the things that makes journalism stories a genre filmmakers go back to is they contain a lot of the qualities of great storytelling. You have people with very ambitious goals who often have to climb mountains to achieve them. That’s the stuff of real drama.”

You may or may not have “the stuff of real drama” waiting in your vineyard or in your production area between the barrels and the stainless steel tanks, but by staying current on how popular culture paints the picture of journalism today, you’ll be ahead of the game.

One thought on “Go to the movies!”